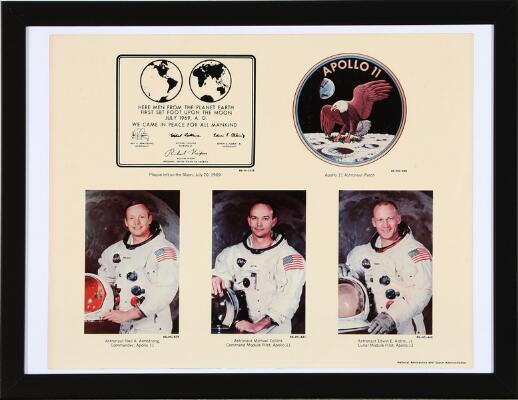 Apollo 11 was launched by a Saturn V rocket from Kennedy Space Center on Merritt Island, Florida, on July 16 1969 at 13:32 UTC, and it was the fifth crewed mission of NASA's Apollo program. The Apollo spacecraft had three parts: a command module (CM) with a cabin for the three astronauts, the only part that returned to Earth; a service module (SM), which supported the command module with propulsion, electrical power, oxygen, and water; and a lunar module (LM) that had two stages—a descent stage for landing on the Moon and an ascent stage to place the astronauts back into lunar orbit.

This is an original NASA colour offset photograph from 1969, which has yellowed slightly due to ageing/storage conditions. Furthermore normal signs of handling.