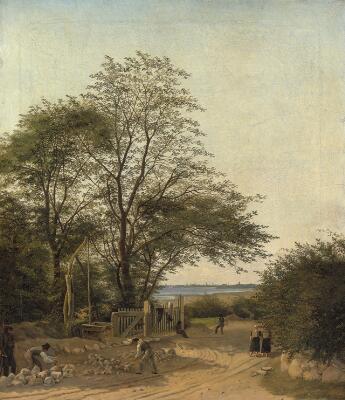 “Et Partie Træer ved Charlottenlund, efter Naturen”. Trees at Charlottenlund, painted after nature. In the foreground men building a stone wall, in the middle ground fishermen's wives on their way to the market and in the background Copenhagen's towers. 1827. Unsigned. Oil on canvas. 57×49 cm.

In 1823, at the suggestion of the landscape painter Jens Peter Møller, the Royal Danish Academy of Fine Arts introduced a competition for landscape painting with a cash prize attached. It was a requirement that the participating students should paint directly after nature and thus paint outdoors – plein-air – or at least commence the work on the painting directly in front of the motif. “At this time, the study of nature was generally not part of the education at the European art schools, and the competition in 1823 should be regarded as the earliest example of plein-air painting being an official element in the education of Danish painters.” (Jesper Svenningsen: "For morskab og for penge. Det danske friluftsmaleri i 1820’erne”. (For pleasure and for prizes: The Danish plein-air painting in the 1820s) in the online magazine Perspective, October 2015).

It has previously been a generally accepted assumption that it was Christoffer Wilhelm Eckersberg who introduced plein-air painting as part of the students' education at the Art Academy when in the 1830s he took his students on excursions to the surrounding areas around Copenhagen to draw and paint. However, the plein-air painting already became part of the art education in 1823 and during the subsequent years as a result of Jens Peter Møller's competition.

The present painting is probably Petzholdt's contribution to the landscape painting competition in 1827, and as the title indicates, it was also painted in nature. It is thus one of the first plein-air paintings made as part of the formal training at the Royal Danish Academy of Fine Arts. Oddly enough, it has been owned by Eckersberg and was sold at his estate auction.

At the National Gallery of Denmark there is a drawing by Petzholdt with the same motif but without the figures (Inv. No. KKS1965–209).

There is an almost identical painting by Petzholdt sold at Bruun Rasmussen auction 716, 2002, lot no. 1297. This is reproduced in Jesper Svenningen's article: “For morskab og for penge. Det danske friluftsmaleri i 1820’erne”. (For pleasure and for prizes: The Danish plein-air painting in the 1820s)”.