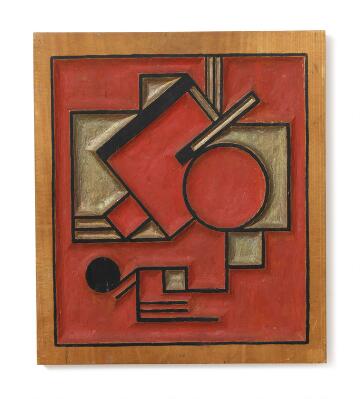 Erich Buchholz was one of the central figures in the development of non-figurative painting in Germany. His studio at 15 Herkulesufer in Berlin was a gathering place for several of the avant-garde artists of the time, such as the painters Kurt Schwitters and Hannah Höch, as well as the author Raoul Hausmann, who was one of the leading figures within the German Dada movement. Furthermore, Buchholz exhibited diligently, for example in 1922 at “Constructivism and Suprematism”, Van Diemer Gallery, together with, among others, László Moholy-Nagy, László Péri and El Lissitzky.

In addition to the visual arts, his palette ranged widely from scenography to architecture, advertising graphics and product design, and from the early 1920s, Buchholz turned his attention towards the new design areas within architecture and typography. Buchholz's art was declared to be “Entartete” by the German National Socialists in 1933. He was arrested several times and thus could not earn a living as an artist until after World War II. In the 1950s and 1960s, Buchholz was rediscovered and gained a wider audience through a renewed interest in constructivist ideas, with his artwork on display at major European and American exhibitions.

Buchholz's first solo exhibition was in 1921 at the Galerie Der Sturm in Berlin, where he showed a series of sixteen wooden blocks. The first of these was originally intended to be a woodcut, but gradually he began to regard it as an independent work of art. “Aufgeschlagenes Buch” from 1922, which we can present at this auction, is thus very characteristic of Buchholz' work, his use of colour and materials, and an expression of how he combines techniques from the pictorial and graphic artwork.

Paintings, sculptures and a sound recording with John Lennon, 28 September 2021