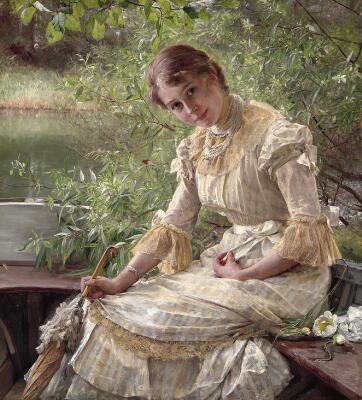 By MA, PhD Emilie Bierlich In 1885, Bertha Wegmann exhibited a portrait at the Salon in Paris entitled “Me Voici! - portrait. Bras de la Seine”. We do not know the measurements of this painting, but we do know that Wegmann is working on a portrait over the summer and autumn of 1884, where she uses lots of colour and canvas, and where she and her hopes are fresh and ‘dipped in green’, as she writes in her letters to the Melchior family. In the years prior to this, Marie Triepcke had, according to her own memoir, sat as a model for Wegmann down by the moat at what is today the lake in Tivoli. The work had stretched across six months, and with tall trees, water lilies, ducks and limited public access, it must have been an idyllic place – reminiscent of the banks of the Seine just outside Paris. Could the present painting be the work that was exhibited at the Salon in Paris in 1885?

Triepcke herself began as a student of Carl Thomsen (1847–1912) for half a year, before she switched to Bertha Wegmann's art school, where she studied for two winters from 1883–1885. It is during this period that Wegmann painted the two portraits of Marie that we now know of. The first was owned by Krøyer and was sold at his estate sale at Charlottenborg in 1910. Today it is part of the former American ambassador to Denmark John Loeb's magnificent collection of Danish art from Abildgaard until today. This work is unsigned and looks more like a preliminary study insinuating the end of the dress and umbrella, many pentimenti and deep shadow effects on the face derived from the clear light coming in from the side. The second version (the present painting), which is more thoroughly painted, more subdued and far more confidently painted with only a few additions to the original version, was signed and dated, undoubtedly for exhibition purposes. The vibrant atmospheric play with light and shadow through the rapid brushstrokes in the waist of the dress and facial features in the first version has been replaced by a focus on the model's grace and the virtuously draped silk crinoline. In 1896, this painting was sold at auction to Count Knuth at Rygaard Manor, a family that Wegmann portrayed several times, before it came into the possession of the current family sometime during the 1920s.

As we all know, admiration can work wonders in terms of stimulating ambition, and ever since Marie Triepcke, who was born to German parents in Copenhagen, as a child observed her father's work of designing and drawing textile patterns for the weaving mill at Rubens Klædefabrik (textile company), where he was technical manager, and after she became a frequent guest in the home of, among others, art collector Heinrich Hirschsprung as a friend to the children, her interest in art was firmly established.

After studying with Wegmann for a couple of years, she became one of the founders of the Free School of Art’s course for women, also known as 'The Little School of Art', in the mid-1880s, which was one of the forerunners of the department for women set up by the Royal Danish Academy of Fine Arts in 1888 after long battles between the different parties for and against the idea. The same year, Triepcke made her debut at Charlottenborg. Where she often talks about her lack of courage in letters and memoirs, her art education and the struggle for the rights of the female artists shows a deep source of strength that was to benefit her early on in her career. In 1888 she travelled alone to Paris, intent on making her own way in life. She achieved all the things that were difficult at home. In Paris, she painted nudes at the school of the French artist Gustave Courtois, and later in another context she was taught by Puvis de Chavanne (1924–1898). She visited the Louvre almost daily and went to the galleries and the major exhibitions.

There were lots of Scandinavians in Paris and through the Danish critic and scholar Georg Brandes (1842–1927), whose lectures she had attended in Copenhagen, she was introduced to groups of both writers and artists at his urging. Already a week after her arrival, she met P.S. Krøyer (1851–1909). He had previously refused to teach her when Bertha Wegmann's sister Anna Seekamp had approached him on behalf of Triepcke with a recommendation from Wegmann. But Triepcke's fascination was intact, and she writes in her diary upon arriving in Paris: “I want to write to Krøyer so that I can be sure to meet him.” Through Krøyer she is introduced to Anna and Michael Ancher (1859–1935/1848–1927), who become her closest friends in the circle around Krøyer together with the painters J.F. Willumsen (1863–1958) and Anna Petersen (1845–1910). Through several testimonies, we can see that Triepcke's confidence in her own artistic ability wavers significantly throughout the period, although her best paintings of models known from this stay are excellent. But her insistence on moving about unaccompanied and maintaining women's right to education on an equal footing with men in letters and diaries reveal a remarkable strength that few other women demonstrated at the time.

The story of Marie Triepcke is at once both brief and long. Brief in terms of her artistic career, which stagnated once she took the married name of Krøyer, and the story of yet another patriarchal husband keeping his wife at needlework unfolded, and she instead became famous as her husband's most beautiful model. Later she married the Swedish composer Hugo Alfvén (1872–1960), whose infidelity was even more destructive to Marie’s aesthetic mind, which she unhappily writes about in her letters to Agnes Slott-Møller (1862–1937) from Tallberg in Dalarna, Sweden, where the Alfvén farm was located. Through international art magazines, such as The Studio, Marie stayed up to date throughout her life, and she decorated the homes she lived in as a tastefully well-informed artisan and interior designer. She found an existential meaning of life in the words of the English poet John Keats, whose final two lines in Ode on a Grecian Urn became somewhat of a creed for her search for fairness and attention to beauty throughout her life: “Beauty is truth, truth beauty, ”—That is all Ye know on earth, and all ye need to know." In beauty one finds the truth, and in truth the beauty. The portrait becomes a prophecy of Marie's credo, because where human limitations are many and man eternally perishable, the beauty lives on in art as a witness to the truth of what was, and Marie was truly beautiful.