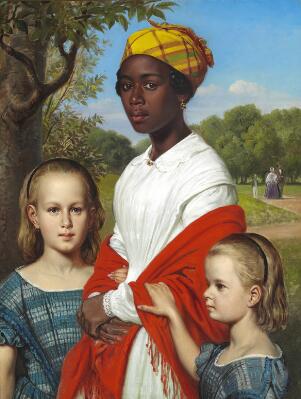 Otto Jacob Marstrand was the oldest brother in a group of five siblings. In 1830, he emigrated to the Danish West Indies, where he settled down as a timber merchant and was later appointed consul and chief fire officer in the town of Charlotte Amalie on the island of St. Thomas. Here he was a witness to von Scholten's abolition of slavery in 1848. In 1855, Otto sent his eldest son Osvald, who was nine at the time, to Denmark as part of the son’s education. In Denmark, the son lived with Wilhelm Marstrand's family in the residency of the professor at Charlottenborg. The following year, Osvald's mother and his two little sisters came to Copenhagen, and shortly thereafter the father also arrived. The whole West Indies branch of the Marstrand family was now – in 1857 – for the first time together in Copenhagen, and this gave Wilhelm Marstrand a reason to paint this somewhat atypical family portrait. The rest of the family returned relatively quickly to the West Indies, but Osvald stayed on in Copenhagen for ten years until he completed his schooling.

It is an unusual family portrait. The main figure is the family’s West Indian nanny, Justina, who travelled with the family to Copenhagen. She is centrally located in the foreground with one of the two Marstrand girls on each side. She looks directly at the viewer in a calm and collected manner – as if it was a portrait of a queen. The colours are clear and simple, her dark skin, the white dress, the red shawl, the distinctive orange headgear against the blue sky and the green garden. The two girls are clinging to the nanny. Dressed in matching dresses in blue-green colours, with the same hairstyles and with distant eyes they appear almost identical – in profile and en face respectively. In the background and to the right are very small and sketch-like figures of their father, mother and brother. The nanny is the main character of the Marstrand family portrait – she is the compositional and colouristic centre.

It is a very significant painting when trying to understand Denmark's role as a colonial power and slave nation. This year, where it is the 100th anniversary of the sale of the Danish West Indies to the United States, the painting is as relevant as ever, especially since we have so relatively few paintings by Danish painters that depict the slaves and their descendants – and not at all like this, where a young black West Indian woman is the most important main character of the painting. An exception is N. P. Holbech's famous painting from 1838, depicting Holbech's daughter Marie sitting on the arm of the West Indian nanny, Neky (the National Museum of Denmark, reproduced p. 53). At this auction, you can also see the painting “En leg med Marionetdukker” (A Play with Marionettes) by Nicolai Habbe, which also depicts a Danish West Indian woman, but, in a more typical fashion where she is one among several spectators to the centre piece – a puppet show (see lot. no. 102).

Marstrand's painting was painted in 1857 only 9 years after the abolition of slavery in the Danish West Indies – perhaps the young nanny was born a slave – and 60 years before the sale of the Danish West Indies – she might also have experienced this event as an old woman. She stands as an important representative of an overlooked group of people at the end of an important chapter of Danish colonial history but also in the midst of a very exciting artistic and art historical meeting between the late Danish Golden Age and French Impressionism in the shape of Fritz Melbye and Camille Pissarro respectively. The two met in 1849 on St. Thomas in the Danish West Indies, and a close friendship developed between the two artists, where Melbye became a mentor and teacher for Pissarro. Fritz Melbye, who had been educated by his brother the marine painter Anton Melbye, who in turn had been a student of C. W. Eckersberg, was in this way schooled in the traditions of the Danish Golden Age, and Camille Pissarro became one of the leading figures within the French Impressionism. The art historical and artistic significance of this meeting between Danish Golden Age and French Impressionism, is only now being researched more thoroughly and given more attention with the current exhibition “Pissarro. A Meeting on St. Thomas”, which is currently at Ordrupgaard.

Provenance: Passed down through the brother’s family until today. It has therefore never been up for auction before. Otto Marstrand’s daughter Emily (portrayed in the painting) inherited the painting after her father. Emily married Gustav Oscar Gyllich in 1871. They lived in the West Indies and had 5 children. The current owner's grandmother was their youngest daughter Edna. When she was little, the family moved to Denmark. Edna married Fredrik Fredriksen and had a son, Oscar, who changed his last name to his grandmother's maiden name Gyllich. Oscar died young, so the painting has passed from Emily to Edna to the current owner.