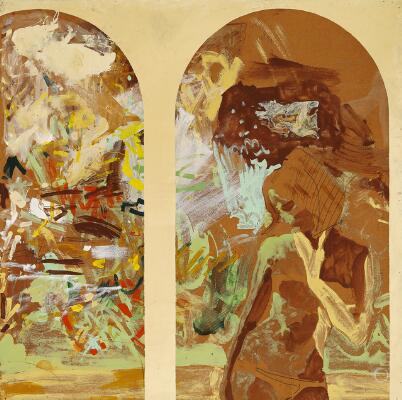 “I have often had to hear, especially in the beginning, that this is provincial pop art. And there does exist a more sophisticated, more correct and more streamlined pop art – but I know what pop art came to mean for me. Pop art was a kind of key that allowed me to use my own experiences, the personal so to speak, and that is what I am doing with somewhat impropriety. And I can’t get around the fact that my own experiences include the Popeye magazine in Denmark, Prince Valiant comics and Poul Steffensen’s illustrations to the Gønge Chieftain, all of this clearly slips into the universe of the Masonites (...) I definitely do not consider them [the Masonite works of the 1960s] as a period I am over and done with (...) I cannot be a truthful witness to my own youth, but I can see that the way I'm painting now has a strong archaeological element to it, and then I have to say that to a certain degree it is about achieving a better understanding of myself. It's crazy that you end up sounding like an American lifestyle book when you talk about it, but in actuality, I've been so much up the creek without a paddle that it has been necessary. And one of the few means that I know of here in life when dealing with the strange imperatives to ”Become yourself“ or ”Find yourself” is painting.”

“But I might just be an old-fashioned type (...)”, Poul Erik Tøjner in conversation with Per Kirkeby in the catalogue for Louisiana's exhibition “Per Kirkeby 122×122, Painting on Masonite”, Louisiana Museum of Modern Art, Humlebæk, 2002, pp. 7 and 14.