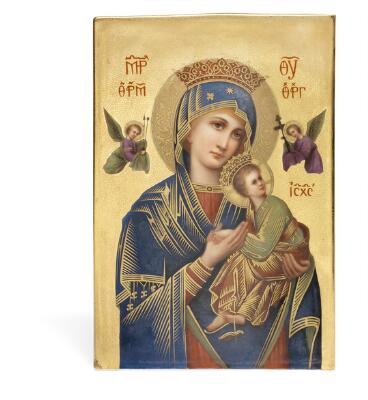 A Russian Mother of God “Strastnaja” (of the Passion) porcelain icon, of the Hodigitria-type, decorated in colours on gilt ground, centrally with the Mother of God holding the Child Jesus, to the right and left the Archangels Gabriel and Mikhail holding lance, nail and the three-barred cross, which are the implements of the Lord's suffering, the frightened Child looks back over his shoulder and grips His Mother's hand with his. Unmarked, but attributed to the Imperial Porcelain Factory, 19th century. 25×17 cm.