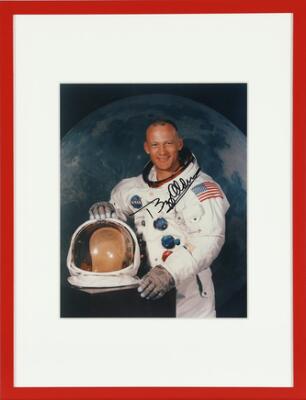 Apollo 11 was the first spacecraft that landed humans on the Moon. Commander Neil Armstrong and lunar module pilot Edwin “Buzz” Aldrin formed the American crew that landed the Apollo Lunar Module Eagle on July 20th, 1969, at 20:17 UTC. Armstrong became the first person to step onto the lunar surface, joined by Aldrin 19 minutes later. They spent two hours and 31 minutes together outside the spacecraft, and they collected 44 pounds (22 kg) of lunar material to bring back to Earth

Michael Collins' role was to remain in the commando module in orbit around the Moon and from here form a connection between Houston, Texas and the Lunar Module.

Normal signs of handling. This is an original NASA colour offset photograph with the authentic signature of the Apollo 11 astronaut Edwin “Buzz” Aldrin. Certificate of authenticity from BAS included. BAS is one of the most reputable authorities in the world in regards to valuation and authentication of signatures.