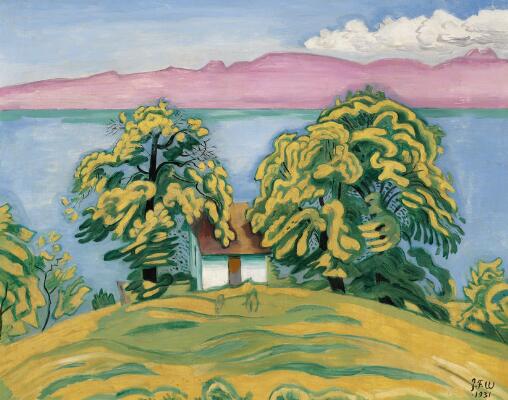 “Kastanietræer ved Søens Bred. I Baggrunden Bjærge. Solskin” (Chestnut trees on the shores of the lake. In the background mountains. Sunshine). Signed J. F. W. 1931; signed on a label on the reverse. Oil on canvas. 73×92 cm.

In the second half of August 1931, J. F. Willumsen revisits the town of Meillerie on the shores of the French part of Lake Geneva (Lac Léman), where the present work must have been painted. Already 40 years earlier – in the summer of 1891 – the artist had studied the map of France to find “(...) a suitable place to work. It had to be an isolated place where I could paint in peace and further develop my new style” – as he later explained to the art historian Ernst Mentze.

Prior to the voyage in 1891, the artist's first scandalous success arrived with the allegorical etching entitled “Fertility”, depicting his heavily pregnant wife, Juliette Willumsen. In the summer of 1891, several of Willumsen's early masterpieces were created in Meillerie, where he stayed with his family for six weeks. In 1931, J.F. Willumsen also travelled around Southern Europe with a morose backdrop stemming from a series of misunderstandings on the Danish art scene – this time prompted by a mixed reception some years earlier of his central piece “The Great Relief” (1893–1928) – and the final disintegration of his second marriage – with Edith – at the end of the 1920s, but also new positive experiences such as the meeting with Michelle Bourret, who was to become Willumsen’s muse for the rest of his life.

Despite that J.F. Willumsen continued to experiment and develop his style through a long artistic life, he also returned several times to his previous motifs. There are, for instance, two versions of the canonized masterpiece “A Mountain Climber” (1904 and 1912) and two versions of “After the Storm” (1905 and 1916). Here the specific sources of inspiration are the works “Real Chestnuts” (1891, J.F. Willumsens Museum) and the sister image “A Mountain Hallow ”. The offered work establishes connections through its motif and style back to the artist's most crucial, formative years as a Symbolist, but in the intense colour, the work is also related to the contemporary, almost phosphorizing, motifs from Venice, where the artist stayed in July 1931 prior to his stay in Meillerie.