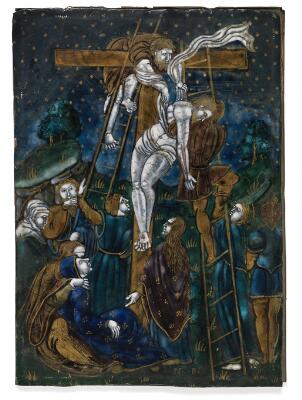 The Descent from the Cross a Limoges enamel on copper plaque, decorated in turquoise, blue, purple, green, brown and with gold. Signed in gold N.B. 16th century. 28.5×20 cm.

From the 12th century onwards the French city of Limoges became a well-known name among the elite of the Christian world due to the enamels produced in the workshops of the City, making Limoges the European center of enamel craftsmanship. In a limited number of dynastic family workshops, the highly specialized art of melting layers of colored glass onto metal surfaces and applying gilded lines was handed down through generations under the patronage of royal and ecclesiastical men. The unique ability of the glass medium to capture blue, a colour so difficult to accomplished in other forms of medieval artwork, made the Limoges enamels a treasure of its time. The treasuring patrons are key to the dissemination of the Limoges enamels throughout the Christian world, from Scandinavia in the north to the Crusader Kingdoms in the south, and include men such as Henry II of England, Archbishop Absalon of Lund, and even Pope Innocent III himself. After the sack of Limoges by the English in 1370 the production ceased for about a century but resurrected in a second high period during the renaissance. The preferred motifs of the enamels also changed with the times. Most notably is the shift occurring in the 1530s from hitherto preferred religious themes to classical subjects from Greek and Roman mythology. The masters of the Limoges enamels worked to satisfy the taste of their patrons and the only personal trace they left on their work, if they left any at all, was the punchmark of their family, the most famous being the Pénicaud, the Limousin, the Raymond, and the Laudin Family, and so, very few names of individual artists are known today.