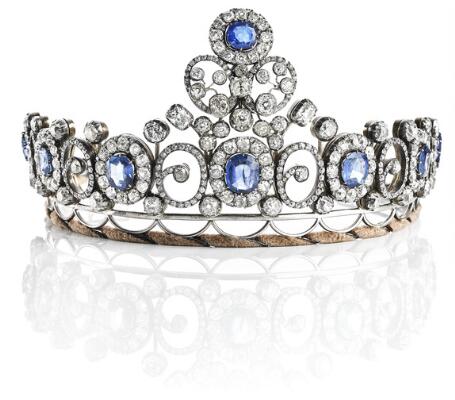 “The Russian Sapphire Tiara”. An unique Imperial and Royal Russian sapphire tiara, set with eight oval-cut sapphires, as well as numerous old mine- and single-cut diamonds. Designed with a raised heart-shaped centre and flower buds, over which a horizontal oval-cut sapphire encircled by diamonds, below thirteen oval and vertical scrolling links increasing size from right and left towards the centre part, seven links set with an oval-cut sapphire encircled by diamonds, between which six open links in the form of swirls set with diamonds, among each link a raised flower bud, below a number of diamonds on a curved circlet wound with velvet ribbon, mounted in gold and silver. Apparently no maker's mark. “The Russian Sapphire Tiara” contains sapphires from Ceylon, a total of eight untreated sapphires of approx. 33 carats, as well as diamonds totalling approx. 53 carats. Colour River-Top, Crystal (E-I). Clarity VS-P1. H. 7.5 cm. L. 36 cm. W. inside 12.5 cm.

Certificate no 103271, dated 10 October 2018, from the Swiss Gemmological Institute SSEF in Basel, Switzerland, is included.

Read more in the illustrated article in our Russian catalogue about the history of “The Russian Sapphire Tiara”, including e.g. the Royal owners, the use and changes through generations, plus Danish sources and Russian archives anno 1898.

Payment is possible only by credit card in the salesroom or by bank transfer.

Payment is possible only by credit card in the salesroom or by bank transfer.