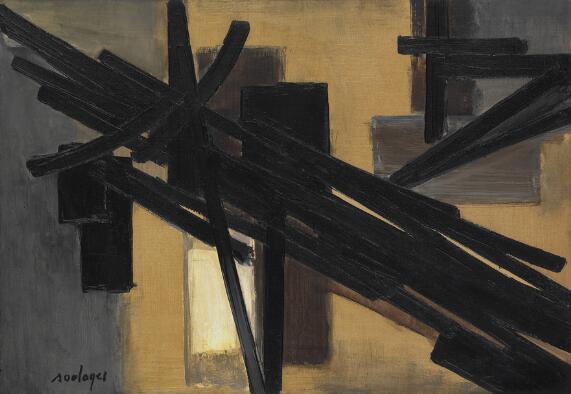 Provenance: Galerie Birch, Copenhagen, 1951. Provenance: Private collection, Denmark. Acquired from the above in 1951.

“For me, it’s important to experience this aesthetic shock, which sets in motion our imagination, our emotions, our feelings, and our thoughts. That’s the purpose of a painting and of art in general.”

Interview with Pierre Soulages by Zoe Stillpass, Interview Magazine, 7 May 2014.

The Painter of Black All great stories begin somewhere, and in many ways, the story of Pierre Soulages – the black eminence of French art – begins in 1948. Here he participates in “Grosse Austellung französiscer abstrakter Malerei”, even with one of his compositions on the poster. The exhibition is a great success and is shown in several important German museums. The following year he has his first solo exhibition in Paris – and the rest is history!

However, the cornerstone of Soulages’ long artistic oeuvre has been planted much earlier, namely via the memories from his childhood and youth of the historical and cultural landscape around Rodez. An experience of the tree is particularly vivid, the network of branches with the light as a changing background behind its dark silhouette, which later becomes an integral, unconscious part of his visual language. Thus, from the beginning, he uses the black colour as a starting point for his studies of the physics of light. Furthermore, large, solid brushes, palette knives and scrapers are part of his artistic toolbox – tools whose strokes and clear structure on the canvas appeal more to him than the refined paintbrushes.

The Danish Connection For Soulages, the late 1940s and early 50s are a period of hectic exhibition activity and represents his real breakthrough both in Europe and on the other side of the Atlantic. The connection to Denmark is established as early as 1950, where he is presented to an enthusiastic Danish audience at the landmark exhibition “Living Colours” at Charlottenborg, facilitated by the art historian Haavard Rostrup. “Abstract art was being attacked from all sides. A great many people in artistic circles were openly hostile to abstraction as practiced by myself and a number of other painters…. It is true, that the Germans, the Americans, and the Danes were the first to take an interest in my work.” (Bernard Ceysson: “Soulages”, Bonfini Press, 1980, p. 69)

In 1951, Soulages' second solo exhibition takes place. This time with the leading Copenhagen gallery owner, Børge Birch. On this occasion, Soulages and his wife, Colette, spend a month in Copenhagen. The special bond with Denmark is preserved and strengthened later on through the friendship with the painter Mogens Andersen, repeated exhibitions on Danish soil and last but not least the decoration of the lobby in Århus Musikhus in 1982.

At this winter’s auction, we are therefore very happy to present “Peinture 59×85 cm, September 1951”. The work was acquired from Birch at the above-mentioned exhibition and has not since been offered for sale.

Quite typical of the artist's works from the period, the painting is structured around a striking clair-obscure effect, where a number of black architectural figures are contrasted by a luminous background in ochre, hazel and dusty grey.