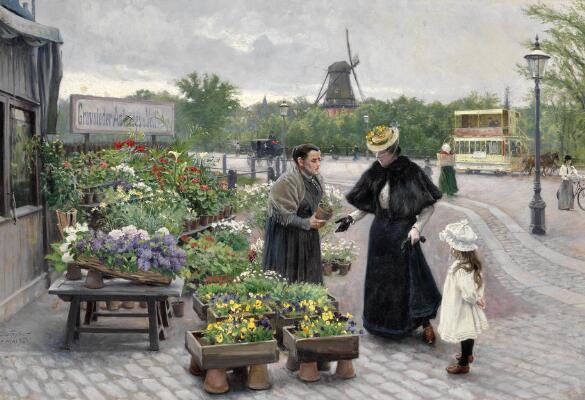 The painter's wife Dagny and their daughter Harriet at a flower stall at Østerport. Signed and dated Paul Fischer Mai 95. Oil on canvas. 64.5×94.5 cm.

This view from Østerbro in Copenhagen, shows how the particular area looked a few years before the construction of Østerport railway station. In 1962, the area was named Oslo Plads (Oslo Square), which it is still known as today. Depicted is the artist's wife Dagny and their daughter Harriet. Literature: Steffen Linvald, “Paul Fischer - københavnernes maler”, 1984, reproduced p. 15 and mentioned p. 122 in a list of Paul Fischer's paintings that he photographed and kept in private albums.

The painting is reproduced in: “København før og nu - og aldrig”, 1990, vol. 10 (Nørrevold, Østervold og Kastellet) p. 206. Here, the painting is described as following (in Danish): “A flower stall on present-day Oslo Square on the location where Østerport Station was constructed in 1897. In the distance, Nyboder and Dronningens Mølle (The Queen's Mill). The mill was demolished in 1895 and was replaced by Nyboder School in 1918. The flower stall is advertising for grave site landscaping, which must be for the neighbouring Garnisons Kirkegård (Garrison Cemetary). The double-decker horsecar drove between Kongens Nytorv and Trianglen 1880–1902.”