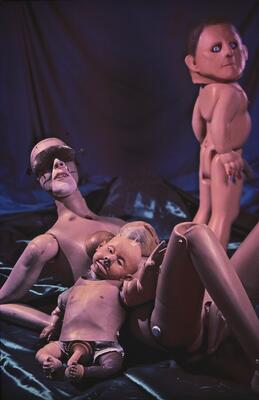 The photograph “Untitled #312” from 1994 is from a period when the American artist Cindy Sherman wanted to disrupt the art world’s perception of her work as an example of a refined aesthetic taste. Sherman (b. 1954) has been one of the most influential artists in contemporary art since her groundbreaking photographic series ”Untitled Film Stills” from 1976–1978. The series addressed gender issues, artificiality and ambiguity in the roles that are played out in Western culture, film and media – primarily enacted through female personas played by herself – and commented on issues about power and representation. But between 1990 and 2000 she stopped appearing in her own artwork. In this series she staged dolls in the manner of surrealist artist Hans Bellmer, but with an entirely different purpose than his: “Sherman creates photographs that suggest a critique of the fetishes of male artist’s such as Bellmer and other Surrealists (...)” Eva Respini: “Cindy Sherman” (2012) p. 38–39. Her work explores the relationship between object, body and representation and is also today – more than 20 years after its creation – relevant in the ongoing discussion of the representation of the female body in our culture. (Respini et al: “Cindy Sherman” 2012, p. 61, fig. 5).