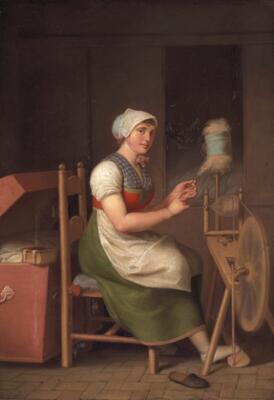 Emil Hannover, A Catalogue Raisonné of the Works of C. W. Eckersberg no. 34.

Emil Hannover writes under no. 35 “The lazy girl puts on make-up for a masquerade ball” the following (in Danish): “This and the preceding painting, which has exactly the same size and colour scheme, apparently belong together either as counterparts or as pieces of a suite similar to those listed under nos. 42–45 (”The Story of a Fallen Girl").

The paintings of the diligent girl and the lazy girl are among Eckersberg's moralizing motifs from his early years, just as the well-known series of paintings entitled “The Story of a Fallen Girl”.

The diligent girl sits almost “doll-like” in her tidy room and spins wool, while the lazy girl sits in her messy and wretched room getting ready for a night on the town. She lives in the present and does not think about the future unlike the hardworking girl. In 1815, the printmaker G.L. Lahde used these paintings as a model for an etched double work entitled “Past-Present”, where the lazy girl represented the present.