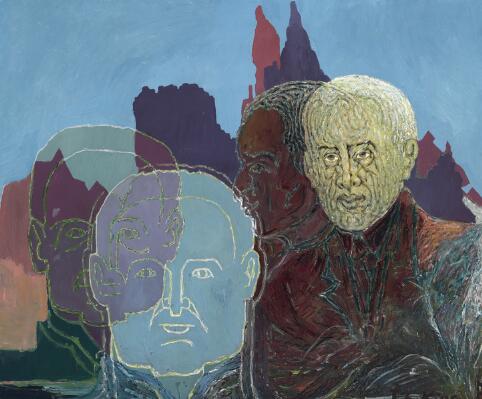 The title and the following description is based on the knowledge of the owner at present:

“The figure group 'Fjölnismenn' consists of the four men: Brynjólfur Pétursson (lawyer), Jónas Hallgrímsson (poet and nature scientist), Konráð Gíslason (linguist) and Tómas Sæmundsson (theologist and priest). They studied at the University of Copenhagen together from around 1830 and published the paper 'Fjölnir' (thus the name 'Fjölnismenn”' promoting Icelandic art and culture as well as the fight for Icelandic independence. It is only a theory that the picture depicts the 'Fjölnismenn' but Jónas Hallgrímsson and the mountain peak (the background of his birthplace) are instantly recognizable".