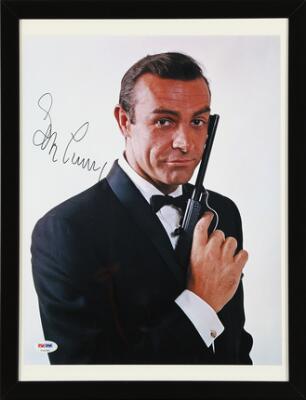 The German Walther LP53 seen in the present image was never actually used in the movies. The gun - characteristic with its long barrel - only appeared in posters and promotion photos, yet - as stated before - never during the film shoots. History has it that EON Productions, the company behind the Bond movies, forgot to deliver the correct prop, the small Walther PPK, to the photographer (David Hurn), who was to create the picture of Sean Connery prior to the release of “From Russia With Love” (1963). Hurn, however, solved the problem by providing a pistol himself - although somewhat different from the intended one. Moreover, Walther LP53 isn't even a real gun. It's an air gun! “LP” stands for “Luftpistole”, air pistol in German.

No remarks. This is an original colour photograph with the authentic signature of the Scottish actor Sean Connery. Certificate of authenticity from PSA/DNA included. PSA/DNA is one of the most reputable authorities in the world in regards to valuation and authentication of signatures.