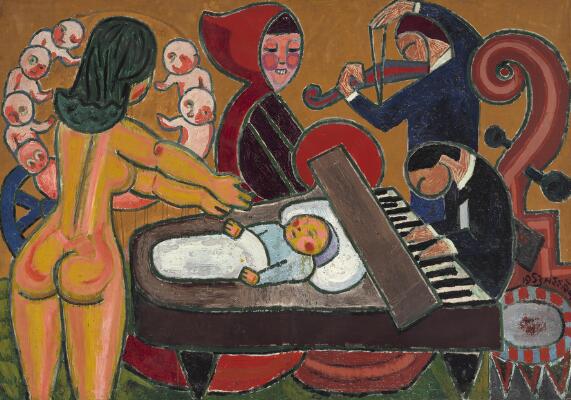 A letter from the artist to the owner is enclosed, dated Vanløse, March, 1978.

It is a rare occasion to see the early, large-scale and symbolic works by Henry Heerup in either private ownership or for public sale. Therefore, it is a special pleasure to be able to present the monumental work by Heerup entitled “The Concert”, which shows the artist from his best and most historically significant side. At the same time, it is a kind of rediscovery since the painting has not been in Denmark since 1962, when its Danish owner brought it with her to the United States in connection with her marriage to an American, whom she settled with in New Jersey.

In a Danish context, Heerup, more than anyone else, is considered the master of symbols. He is loved for his portrayal of the great themes and dramas of human existence in a direct visual style, where emotions, different life stages and the passage of time are communicated through broadly understood symbols. Heerup's best works are outright modern icons or hymns to human interconnectedness and life with all that it contains of both joy and sorrow.

A negative result of Heerup's great popularity and public appeal has probably been, at least for a number of years, a somewhat one-sided perception of his art as representing an uncontroversial, pleasantly affirming world of motifs, which has overshadowed the more life-affirming and purely vitalistic aspects that are also at work in his art. In this connection, it is worth highlighting a passage in an accompanying letter from Heerup to the owner of the painting, Grete Lamb. The artist replies to a story (which we unfortunately do not know) about the reception of the work among the guests in the American home: “(…) It Amuses Me To Hear What Reactions They Cause In The People Who See Them. I hope that there will be more and more people who do not see anything naughty in nudity”.

The work up for auction is – as the title says – of course a concert. But it is also a hymn of life and fertility with the mother and child, the wheel as a symbol of time and the movement of everything, figures who on the one hand represent a pianist and an instrument, but also in the strong outline of the outer contours, abstract symbols that create associations to both phallic and fetal-like forms, which are explicit in Heerup's other work.

Given the painting's date – 1953 – and especially the circle of children who form a wheel or a halo behind the woman with her back turned, but also the whole compositional movement of the painting from a light to a darker side, it is at the same time obvious to consider a connection to the works of Asger Jorn, who at exactly the same time in several paintings worked with the “Wheel of Life” motif. The theme dates back to the Middle Ages and emphasizes the circular aspect of life from birth over youth and the experience of love and creation of new life to old age and death. The return of life itself. All of this is also an underlying tone in “The Concert” and in Heerup's work as a whole.