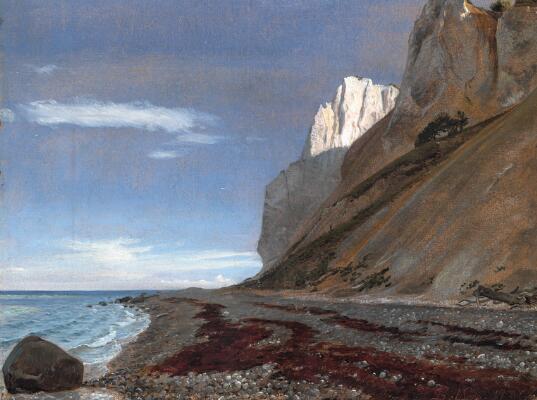 Purchased by Nationalmuseum in Stockholm in June 2020.

View towards Møns Klint (the cliffs of Møn) with 'Taleren' seen from the beach just below 'Sommerspiret'. Signed with monogram and dated 1 Sep 1846. Oil on paper laid on canvas. 28×37 cm.

P.C. Skovgaard was better than most Danish painters at comprehending and reproducing the magnificent and dramatic Danish nature. This is expressed in the present painting from Møns Klint.

“The motif Møns Klint would become a long-lasting love for Skovgaard” (Oelsner p. 76).

He often returned to the area and rendered the cliffs both in smaller works like here and in works of more impressive size.

P.C. Skovgaard visited Møns Klint for the first time in 1841. In an exchange of letters between the art historian N.L. Høyen and P.C. Skovgaard, the former wrote about his enthusiasm for Møns Klint: “There is such a rich substance for a painter! .... It stands against the air and the sea like the marble palaces in the works of Paul Veronese” (Oelsner s. 75). Høyen also highlighted the special light between the sky and the sea and mentioned that the light in the area resembled that of southern Europe more than in any other place in Denmark. P.C. Skovgaard was encouraged to visit the island of Møn, and he was just as taken by the magnificent nature as Høyen. It was a difficult task to portray the light and shadows in the large chalk cliffs and adapt them to the surrounding nature: the sky, sea and beach. It caused Skovgaard a great deal of anguish, and only when he went down onto the beach one day and observed the light’s effect on the large chalk cliffs, did he understand how to approach the painting process. Skovgaard chose to paint 'Taleren' from the beach, making the cliff formation seem even more impressive while leaving parts of the cliffs in shadow. In this way, he succeeded in creating greater nuance in the depiction of the cliffs. Several facets emerged. Some of Skovgaard's contemporaries such as C.W. Eckersberg, I.C. Dahl and Jørgen Roed, were also preoccupied with this peculiar nature area and painted significant and important paintings here.