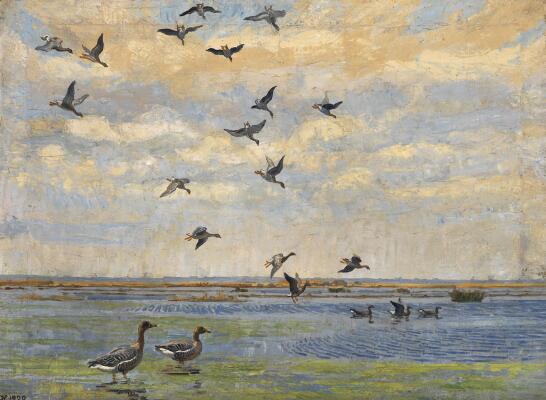 Filsø or Fiilsø in Southwest Jutland, used to be the second largest lake in Denmark spanning an area of more than 30 square kilometers. In the middle of the 19th century, the farmers began to drain the lake in order to extend the farmland. This continued until the 1940s. In the last part of the 20th century, part of the land was preserved, and in 1977 it was designated as an international protected wetlands (a nature reserve) and the lake has now been re-established. Filsø is situated on the flyway for several hundred thousand migrating birds, and has once again become an important stop-over spot for geese, ducks, swans and golden plover. Several islets have been established, which attract many breeding birds.

Due to the beautiful landscape and the varied bird life, Johannes Larsen was very fond of painting around Filsø.