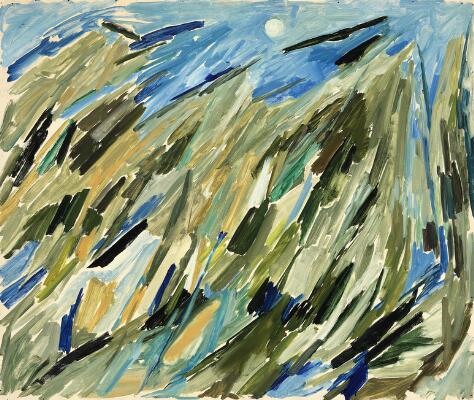 Else Alfelt belongs among the experimental art pioneers who, from the 1930s and onwards, brought abstract art into the spotlight in Denmark. Although she began painting at a very young age, she never received any formal education since her original application for admission to the Royal Danish Academy of Fine Arts was rejected.

In 1933, Alfelt stayed at the Folk High School in Elsinore, where she met her future husband, Carl-Henning Pedersen. The meeting was a defining moment for both people, both artistically and privately, as the relationship, in addition to becoming a warm, loving relationship, also functioned as a fruitful artistic collaboration. Alfelt made her debut at The Danish Artists’ Autumn Exhibition in 1936, and from this point on she was an integrated part of the period’s pioneering artists that made their distinctive marks on Danish art history. In 1941, she participated in the artist group Helhesten's famous Tent Exhibition at Bellevue and also participated in the Autumn Exhibition in 1946. She was also one of the CoBrA movement's few female members.

Alfelt painted mountains before she experienced them in real life. Although her works already from the 1940s took on the shape of mountain peaks, it was only after the war that Alfelt visited the object of her dreams in Swedish and Norwegian Lapland: “I think mountains act as a border between the real and the unreal, it is the place where heaven and earth meet”, as she expressed it in an interview with Virtus Schade in 1955. The encounter with this type of nature truly liberated Alfelt's colouristic and lyrical talent, and moods of nature then became a dominant source of inspiration and driving force in her work.

Her artistic source was continuously nurtured through countless journeys to places far and wide, as can be seen in the two works up for auction here, both of which come from the Carl-Henning Pedersen and Sidsel Ramson Foundations.

During her lifetime, Alfelt received several scholarships and awards, she participated in numerous trendsetting exhibitions and is today represented at a large number of museums at home and abroad. Furthermore, she is currently part of an exhibition entitled “COBRA The Women Artists” at Museum Jorn in Silkeborg.