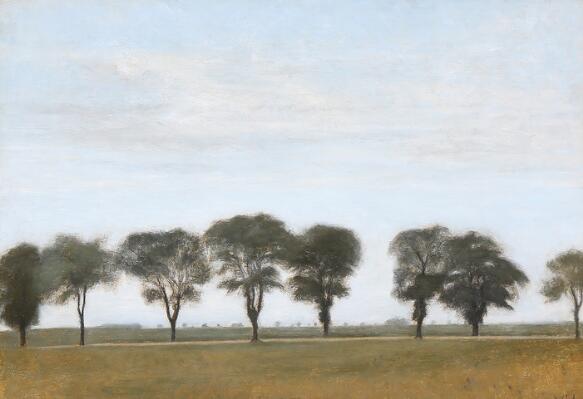 Purchased by The David Collection in Copenhagen

“Landskab fra Kongevejen ved Gentofte. Sommer”. Landscape from Kongevejen near Gentofte, north of Copenhagen. Summer. The sky covers three quarters of the painting’s surface. The flat landscape with the low horizon consists of yellow and green fields through which the straight road runs across the painting. Tall trees along the road. 1892. Signed V. H. Oil on canvas. 32×46 cm.

Literature: Poul Vad, “Hammershøi - Værk og liv”, 2003 pp. 175, reproduced p. 180. Here Poul Vad describes Hammershøi's landscapes and explains how he picks up the tradition from the landscape painters of the Romantic period such as Lundbye and Skovgaard: “Instead of painting the emotion's sincere but unsentimental connection with the landscape upon the canvas, Hammershøi depicted the dual experience of heartfelt empathy and impassable distance; and instead of painting what is near and distant together in the successive connection inwards into the space of the landscape, he left out everything that could attract attention to the foreground and instead focused sharply on the middle ground; he based the image on the dialectic between the measurable extent of the horizontal plane (from one edge of the frame to the other) and the immeasurable deep space of the air's (and heaven's) perspective.”

There is no better way of describing Hammershøi's way of painting the landscape, and the description fits so well with the present painting.