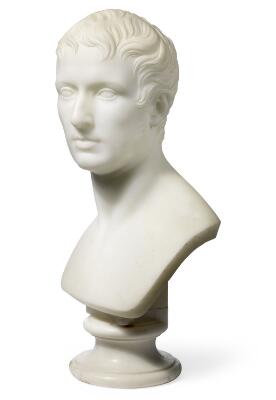 Else Kai Sass, A Catalogue Raisonné of the portrait busts by Thorvaldsen no. 108.

Caspar Jens Christopher Bartholin (1782–1805) was a Danish officer and lawyer with a keen interest in art and literature. The present bust was presumably commissioned by Caspar Bartholin's brother, Frederik, and executed 1818–19. It was made after a death mask taken by Thorvaldsen shortly after Caspar Batholin's early death in 1805.

A version in plaster is in the collection of Thorvaldsen's Museum, Copenhagen inv. no. A227.

Provenance: The Bartholin family until today.