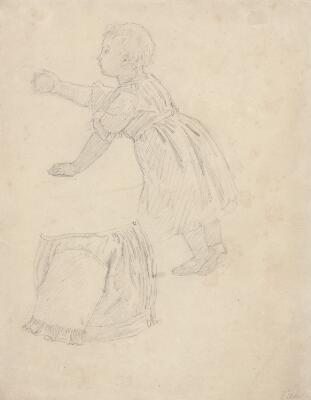 A little boy with an apple in his hand. Unsigned. Inscribed Købke. Verso studies of children's hands, one with an apple. Inscribed Fru Raffenbergs Auction 89. Pencil and pastel on paper. 33×26 cm.

Christen Købke has drawn and painted several portraits of children. The National Gallery of Denmark has several drawings in pencil depicting Købke's son, Peter Købke (1841–1923). This could also be a study of Peter.

Wife of Councillor of State Sophie Frederikke Raffenberg born Hagerup (1806–1889) was married to ouncillor of State Michael Raffenberg (1808–1881). The couple associated with several of the greatest artists of the time and had a great sense and understanding of art. He was for a number of years a member of the board of the Art Association (Kunstforeningen) in Copenhagen. Several artists have portrayed the couple both together and separately. Wilhelm Bendz painted in 1830 his famous portrait of “Familien Raffenberg”, where you see the young Michael next to his fiancée Sophie Frederikke and his mother (The National Gallery of Denmark inv. No. KMS 7594).