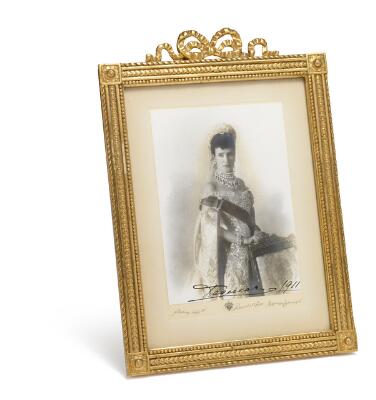 According to tradition, the present photograph was taken at her son, Tsar Nicholas II of Russia's wedding on 26 November 1894. Despite Tsaritsa Maria Feodorovna's grief after the death of her husband, Tsar Alexander III of Russia, on 1 November 1894, she again surprised everybody with her youthful beauty at the wedding. It was said that several guests confused her with the bride. Actually, 26 November was her birthday and this date was chosen for the wedding, as the rules of grief therefore were supspended. The photograph is known with different dates, written by the Tsaritsa herself. Apparently, she liked the portrait, and therefore she used it for future official gifts with later dates than 1894.