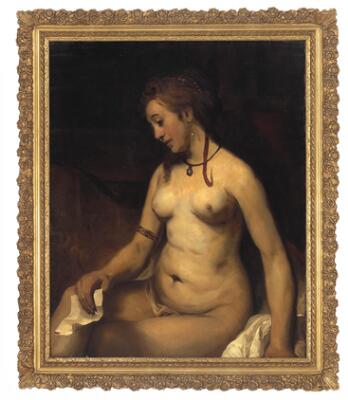 In May of 1877, Krøyer travelled to Paris via Belgium and the Netherlands. Here, he stopped to visit the famous museums, and in Amsterdam, he became fascinated by the works of Rembrandt. After arriving in Paris, Krøyer settled in Montmartre, which at the time was the neighbourhood of choice for artists. As a city, Paris was a place of unlimited urban opportunities for Krøyer: the many museums, all the art dealers' exhibitions, the many cafes, the beautiful women and the elegant boulevards suited Krøyer perfectly.

Paris had become the city where artists came to better their craft and be inspired. Carl Locher was one of the first Danish painters to go there.

Krøyer met with his Danish painter friends, including Karl Madsen, who studied with Jean Léon-Jérôme, as well as P.A. Schou, Hans Nikolaj Hansen and Laurits Tuxen, who all attended Léon Bonnat's art school. It was Tuxen who introduced Krøyer to Bonnat.

Krøyer had brought some of his bright studies from Hornbæk. However, they were met with criticism from several artists – both Madsen and Bonnat stated “that the colour and tone had no fullness – that they almost looked like watercolours”, and Bonnat continued: “his studies looked like a set piece for the theatre”.

At Bonnat's art school, Krøyer had to “work on” establishing a correct relationship between the larger surfaces of the paintings and finding the “shades” in the “colour”.

In particular, Bonnat highlighted two painters who had qualities worth imitating, namely the Spanish painter Jusepe de Ribera and Rembrandt van Rijn from the Netherlands. They showed in their paintings a simplicity, greatness and wholeness.

Krøyer writes on 21 August 1877, to Pauline Hirschsprung, who was married to Krøyer’s patron the tobacco manufacturer Heinrich Hirschsprung in Copenhagen: “I am currently copying a painting by Rembrandt at the Louvre. The work depends on whether I can capture ”the grandness“”. The painting up for auction is the one he was working on at this time and the one Mentze mistakenly has referred to as “Susanne at her Bath”. As you can see, Krøyer did indeed capture “the grandness”.