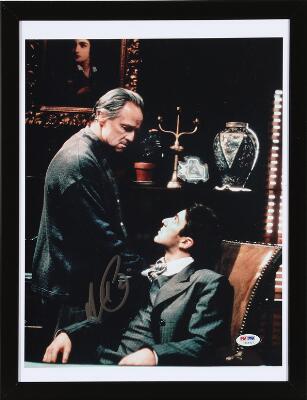 Gordon Willis: A signed colour photograph of the American actor Al Pacino (b. 1940) in his role as Michael Corleone in “The Godfather”. At his side Marlon Brando as Vito Corleone. Photo size 35.5×28 cm. Frame size 43×33 cm.

In 1966, after several attempts, Al Pacino managed to get into “The Actors' Studio”, where he - among others - was taught by Lee Israel Strasberg (1901–1982), whom he later was to face in “The Godfather”. Here Strasberg plays the intelligent Hyman Roth, a character built on real life Meyer Lansky (1902–1983).

“My father taught me many things. He taught me in this room. He taught me: 'Keep your friends close, but your enemies closer'”. Michael Corleone

No remarks. This is an original colour photograph with the authentic signature of the American actor Al Pacino. Certificate of authenticity from PSA/DNA included. PSA/DNA is one of the most reputable authorities in the world in regards to valuation and authentication of signatures.