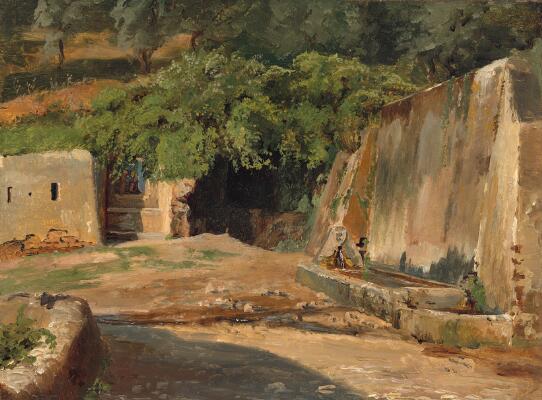 The oil sketch is almost certainly painted in the vicinity of Olevano. It is unlikely that it was made on Petzholdt’s first visit to Olevano in the summer of 1832. He probably executed it on his return to Olevano in one of the three consecutive summers – he is known to have visited the village in also 1833, 1834 and 1835. The sketch depicts a lavatoio pubblico, a washing place for the local villagers. It appears to have been abandoned, since the trough shown in the lower left corner of the sketch is not filled with water but overgrown with vegetation. There is no evidence of human activity or sign of the movement of livestock. The high wall at the right shows distinct signs of damp and is partly overgrown with moss, ivy and other creepers. At the centre of the image is a grotto or cave and on one side of it, an indeterminate building – a house or shed now carpeted with grass and with bare patches at the base of its wall where render has fallen off. A votive altar can be glimpsed beneath the dense vegetation hanging over a prayer bench to the left of the grotto. It shows the slight forms of two figures – probably two local saints – painted in brown on a light blue ground. But devotional acts are clearly no longer performed here. The former washing place is fed by a spring which streams out of the ground into the grotto and is channelled through a pipe into a stone trough. From there it flows down into a second, smaller trough. Such springs are common in Italy. Known as fontanili, they differ from wells in that they have an outlet. Each spring usually has a local name and is canalized – the water is led through a pipe to a tap which can be opened to fill a stone trough. The troughs were used by local women for washing clothes, for watering livestock and to collect water for general use. Rows of olive trees can be glimpsed in the upper left corner of the image. They are set on a patch of steep terrain bordered at the right by a wall or ruined building. The trees are cursorily sketched with a coarse brush, a technique first practised by Petzholdt in 1834, while the foliage and blossoms on the bushes overhanging the grotto is handled with a fine brush that picks out the detail of each tiny leaf and petal.

In the summer of 1832, Petzholdt met with his friend, the German painter Friedrich Nerly, in Olevano, and again in 1833. The two artists shared many common interests and almost certainly influenced one another. Petzholdt may have acquired his somewhat impressionistic approach from the experience of his younger colleague’s work. Both painters visited Olevano for the last time in summer 1835.

Unlike Petzholdt's oil sketch “Fountain and Pergola in Italy” (The Art Institute of Chicago, inv. 2002.377), the present oil sketch depicts a relatively small, confined space. Here, Petzholdt focuses solely on a small section of the washing place. There is no expansive view and only a segment of the adjoining olive grove is shown. It seems as if he has scrutinized the place so closely that each tiny pebble is magnified and the viewer might fear tripping over one. But he has not dispensed with the play of warm Italian sunlight, using it to accentuate the damp, decaying walls in a nuanced palette of browns, greys and greens. Both studies are devoid of figures. Petzholdt was not fond of figure painting and merely equipped his finished studio paintings with figurative staffage out of necessity. A number of the paintings and studies made during Petzholdt’s last two summers in Olevano in the years 1834–5, and particularly in Serpentara, the area between Olevano and Civitella, show how meticulously he would observe the motif, painting and sketching in extreme close-up, as the present oil sketch demonstrates. An example is his "Italian mountain landscape with overgrown cliffs” (The National Gallery of Denmark, inv. no. KMS8152).

Petzholdt was a pupil of Christoffer Wilhelm Eckersberg at the Royal Danish Academy of Fine Arts in Copenhagen from 1825 to 1828/9. He would have had every opportunity to see his teacher’s painting ”View from Villa Casale with SS. Giovanni e Paolo” (The David Collection inv. no. 18/1969), when it was exhibited at Kunstforeningen in Copenhagen in 1828. The subject of the present oil sketch is certainly indebted to Eckersberg’s painting, which depicts a view of the famous Roman basilica with a stone water trough in the foreground.