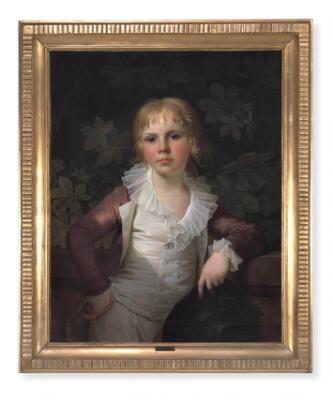 Ellen Poulsen, A Catalogue Raisonné of the Works of Jens Juel no 697 reproduced p. 451.

Literature: Kunst i Privat Eje, vol. I, 1944 mentioned and reproduced p. 360. Owner Consul General Hjalmar Hartmann. Here the painting is described as the pearl in his Danish collection (in Danish): “The delicate, aristocratic child's attire - the cherry eyes, the peachy skin and the blonde half-length hair - are reproduced with grace and sweetness. The painter has even been fond of the light in the white vest and the plum-coloured silk sleeves. The position's unpretentious nonchalance is characteristic of Juel's paintings in the 1790s.

Provenance: The painting was offered in 1923 to the National Gallery of Denmark by the owner, the last Russian ambassador in Vienna, Schebeko, through the Danish envoy in Paris, Chamberlain H. A. Bernhoft. However, the painting was acquired by Consul General Johan Hansen. His auction Winkel & Magnussen, I, 1932 no. 78 reproduced. p. 15. Consul General Hjalmar Hartmann. In his family until sale at Bruun Rasmussen auction 448, 1983 no. 9, reproduced. p. 17. Sold for 225,000 kr. to a Danish art collector, whose descendants now offers it for sale.

Jens Juel is considered one of Denmark's finest portrait painters and with good reason. No one has been able to portray royalty, nobles and even completely “ordinary” people with quite the same skilfulness. He is also considered one of the first artists in Denmark to portray the child as a child rather than as a small adult. At the end of the 18th century, an unprecedented interest in the child and childhood arose. It began in England with painters such as Gainsborough and Reynolds being the most important artists to facilitate this change. The interest derived from Jean-Jaques Rousseau's pedagogical writings, in which he emphasized the period of childhood as something valuable in itself. Children should be allowed to be children! The present painting is a good example with the little prince without a wig and in a loose-fitting low-cut shirt with lace borders. Gone is the adult suit with a collar and shirt frill.