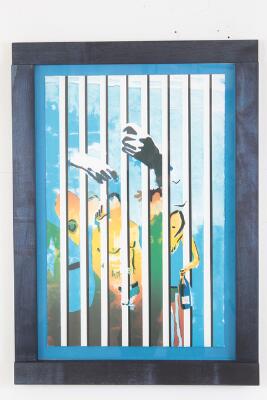 Although he uses various artistic forms of expression such as sculpture, ceramics and installation, he is best known for his paintings. Kørner has on several occasions drawn attention to painting as an artistic form of expression by letting it appear in public spaces, for example in trees along the street or in a restaurant. He has also worked with the relationship between painting and installation by almost staging the paintings. In doing so, he focuses on the works, the presentation and our perception of them. John Kørner works problem-oriented with his works, consciously creating a ‘problem’, which can consist of painting in the field between abstract and figurative or using a color, a figure or something third that breaks the whole. This should create space for contemplation and creativity for himself and the audience. Kørner's works therefore have similarities with the concept art, where the idea and the concept - or in Kørner's case the problem - are in focus. However, no definitive solution to the problem is given. The titles of the works are often short and designed as a commentary, a greeting or a statement. Kørner also deals with community-related and political issues and wants to be in dialogue with his audience. Among other things he has established a bank where, instead of money, you can put your ideals in and let them breed, so that a better world is created.