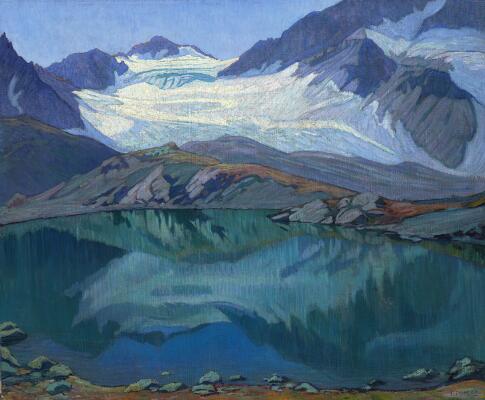 Unknown for many years to a broader audience, Clara Porges (born Sommer) was one of the most important painters in Switzerland of her time. However, in the beginning of the previous century, it was extremely difficult for a female artist to achieve artistic recognition, which prevented her from pursuing the career she was capable of during her lifetime.

She was born in Berlin in 1879, where she attended the municipal art school and received not only her first training as a painter, but also as a musician. Her studies continued at the Fehr Academy founded by Danish born Conrad Fehr, and in 1901 she went on her first study trips to Austria and Italy. A couple of years later - during a stay in Vienna - she met and married the Austrian violinist Friedrich Wilhelm Porges.

Inspired by Friedrich Nietzsche’s description of Sils Maria in Switzerland, she visited the village in 1911, fell in love with its stunning landscape, and finally moved there in 1918. Porges lived in Switzerland until her death.

The painting offered at this auction is quite characteristic for her painterly style; the atmospheric effects of light and expressive use of colours contrasting the sky, the snowy mountains, and their reflections in the clear water of the lake. Furthermore, the use of pure colours, ultramarine or cobalt blue, and the absence of black from the palette makes her stunning and alluring landscapes symbols of both tranquillity and strength.

From 1912 to 1946 Clara Porges' pictures were shown at numerous exhibitions in Dresden, Munich, Stuttgart, London, Vienna, Zurich, Bern, St. Gallen, Bellinzona and Lausanne. As too often the case, after her death her work became almost forgotten until the art collector René Brogli rediscovered her talent in 2011 and started organizing retrospective exhibitions of her oeuvre. Today her works have become very sought after at the market and often achieve high prices at international art auctions.

Paintings, sculptures and a sound recording with John Lennon, 28 September 2021