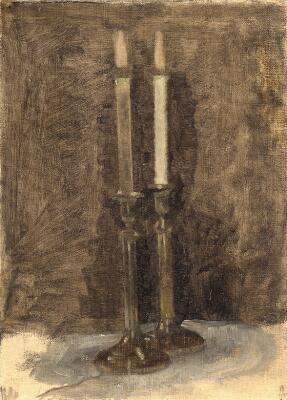 This work with two lit candles in a pair of silver Empire candlesticks, placed slightly offset with one behind the other, is a study that Hammershøi has used in several different important works.

First and foremost, in the very large painting “Five Portraits” from 1901–1902 (The Thiel Gallery, Stockholm). In several studies for “Five Portraits”, Hammershøi experimented with the candles and their placement. In one study there are three candles separated lengthwise along a table, in another study the two candles are separated lengthwise on the table, one hidden behind Svend Hammershøi. In the final version of the painting, the two candles stand as a pair close together and slightly offset to the right of the table (very similar to this present study) in front of the portrait by J.F. Willumsen. Another light is hidden behind Svend Hammershøi at the other end of the table.

Hammershøi also used the same two candlesticks with almost the same placement in the “Coin Collector” from 1904 (National Gallery, Oslo).

In both of the above works, the two lit candles and their placement play a key role in the lighting, colours and composition of the paintings.

The fact that Hammershøi used the two candles in almost identical placements in several different works also tells us something about Hammershøi's modus operandi. He repeated and reused many different recurring elements in many of his works.