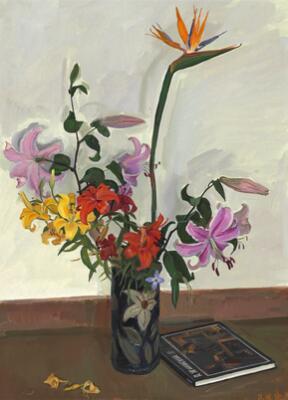 “Lilies and a book”. Still life with colourful lilies and a tall bird of paradise in a vase next to a Russian book about the artist. Signed and dated D. Zh. 91 (in Cyrillic). Oil on canvas. 73×54 cm.

Dmitri Zhilinsky stayed in Denmark 1993–1995, where his primary task was to paint a portrait of H.M. the Queen of Denmark. This portrait was donated to H.M. the Queen by Russia on the occasion of the celebration of the 500th anniversary of the diplomatic connections between the two countries. Dmitri Zhilinsky was a well-considered choice. Thus, his great-grandmother was a sister of the Russian artist Valentin Serov (1865–1911), who in 1899 painted Tsar Alexander III of Russia in a Danish admiral's uniform in front of Fredensborg Castle, north of Copenhagen. The Tsar was married to the Danish-born Tsaritsa Maria Feodorovna, and son-in-law of King Christian IX of Denmark. During Dmitri Zhilinsky's visit, he also portrayed Crown Prince Frederik of Denmark and Prince Joachim of Denmark, just as he painted Chamberlain, Major General and Lord Chamberlain Søren Haslund-Christensen and his wife Marianne Haslund-Christensen. This married couple also arranged contact with several other Danes, who were portrayed by Dmitri Zhilinsky. As a gratitude for good cooperation, the artist gave this present painting to Søren and Marianne Haslund-Christensen, and it has been in their possession until today.