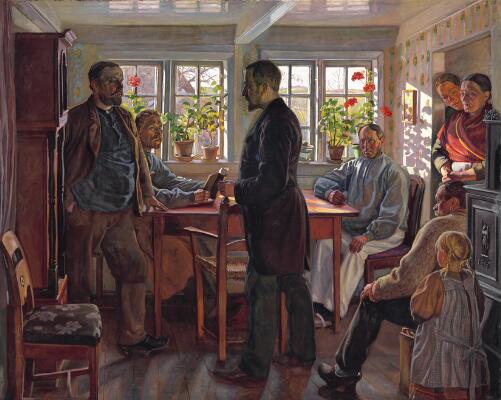 Purchased by Faaborg Museum in December 2020.

Exhibited: Den Frie Udstilling, 1901 no. 200. In the exhibition catalogue, the following exchange of opinions is reproduced: “The Holy Hjulmand: ”It is written that we must beware of false prophets!“ Wise Hans: ”Yes, isn’t that what I'm saying! It's crystal clear.“ The Stranger: ”Lend me your Bible, and I will prove to you that I have said nothing that I cannot defend.“ Wise Hans: ”Have you not heard that the word of God is not for swine to mess about in, for they have a filthy snout. (Fragments of a real conversation)."

Herman Madsen writes about the painting: "It is a fairly common everyday situation that Syberg has provided. A stranger, who propagandizes for some religious sect, has met with the common peasants and craftsmen. A strong exchange of words, Hjulmand insists that the bible states that one should beware of false prophets. The stranger asks to be allowed to borrow the Bible so that he can prove that he has not said anything other than what is written in the scripture. But Wise Hans presents the argument that the bible is not for swine to mess about with because they have a filthy snout (In the exhibition catalogue Syberg has attached these lines to the painting; by the way, all the figures are painted according to certain models. For the stranger he has used his own features). In terms of picturesque qualities, it is a very beautiful work. The interior is excellently painted, where the sunlight flowing in through the small windows highlighting the intense green colours in the translucent leaves of the potted plants is delightfully beautiful. It is probably the only work in which he has been a direct narrator, and in which he places different characters together in a composition. Thus, although in this respect it cannot be said to be typical of Syberg’s work, it still stands as a strong work in his production despite this ‘isolation’. In a simple and immediate way, the dramatic conflict is supported through the psychological depictions of the characters."