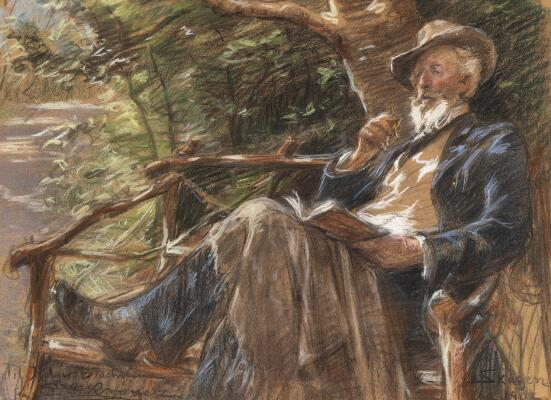 Portrait of Holger Drachmann. He sits on a bench in Skagen's plantation. In one hand he holds a notebook in the other a pencil. A shawl lies above his knees. Signed and dated P. S. Krøyer Skagen Aug. 1902, with dedication 'Til (to) Holger Drachmann'. Pastel on paper. Visible size 58×80 cm.

Peter Michael Hornung writes the following about the portrait: “With the hat set elegantly aslant, the writing pad lying open in his lap and the pencil raised in a gesture of a mind lost in reverie. The poet sits and waits for the inspiration that has begun to arrive at a slower pace for each passing year. The gaze is distant as if Drachmann is completely consumed by his own thoughts, but the poet also seems to be in harmony with his surroundings and does not seek to rise above it as in the previous painting, but it is far from a painting of an old man. Krøyer has discreetly suggested the force of nature stirring within Drachmann, by placing him in front of one of the older trees of the plantation so that it almost looks as if the tree's branches shoot up from his chest. In addition, Krøyer has concentrated the light on the lower part of Drachmann's face, the white shirt and on the branches of the old tree.”

The finished oil portrait (H. Chr. Christensen nr. 716) was sold to a German collector in 1902 after having been exhibited at Eduard Schulte in Berlin. It has not appeared in public since then.

The Hirschsprung Collection has an oil study for the finished portrait (H. Chr. Christensen nr. 715). Krøyer gave the present pastel sketch to Drachmann himself, as the dedication says.