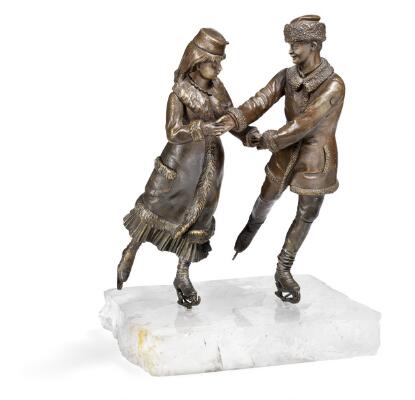 From a series of combined decorative products, executed in the 1890s by C. F. Woerffel Bronze Foundry in St. Petersburg after models of the Russian sculptor Vasily Yakovlevich Grachev (1831–1905).

Ludowika Jakobsson, née Eilers (b. Potsdam 1884, d. Helsinki 1968) and Walter Jakobsson (b. Helsinki 1882, d. Zürich 1957) were a well-known German-Finnish married couple, who competed as a pair in figure skating. Their synchronization shown in their moves became very famous and demonstrated the awareness of body and line necessary for pair work on ice. Together they won several medals at competitions such as the Winter Olympics and the World Championships. They also competed in St. Petersburg, where they once won a large 11th Artel kovsh, which was sold at Bruun Rasmussen Auctioneers in 2017.

Provenance: The Danish Minister, Councilor and Businessman Ludvig Ernst Bramsen (1847–1914). For a number of years, he was, among other positions, chairman of the board of The Danish-Russian Steamship Company (Det Dansk-Russiske Dampskibsselskab), which was founded in 1893. The present sculpture may have come into Ludvig Bramsen's possession in this connection. Thence by descent to Ludvig Bramsen's great-grandson with residence in Denmark, until today.