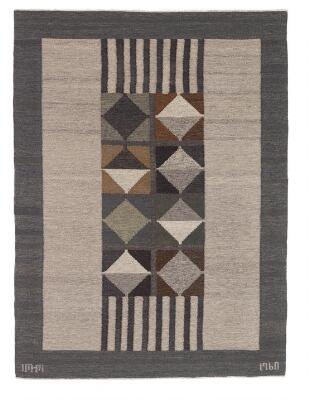 Handwoven wool carpet in “rölakan” technique with geometric pattern in shades of grey and brown. Made and signed 1960 by IMM. L. 248 cm. W. 184 cm.

Ingrid Mjörne Michelsen: Swedish textile designer who worked at the textile factory in Sjuntorp where her father was the manager. Sisters Ulla Margareta Littorin (UML) and Barbro Danielson (BMD). All three sisters made an artistic living. Ingrid founded her own textile workshop during the 1960s in Alingsås, where she designed rugs and church textiles. Ingrid also worked for a period for Borås Wäfveri AB where she designed “Linje Hemma” during the 1960s and 1970s.