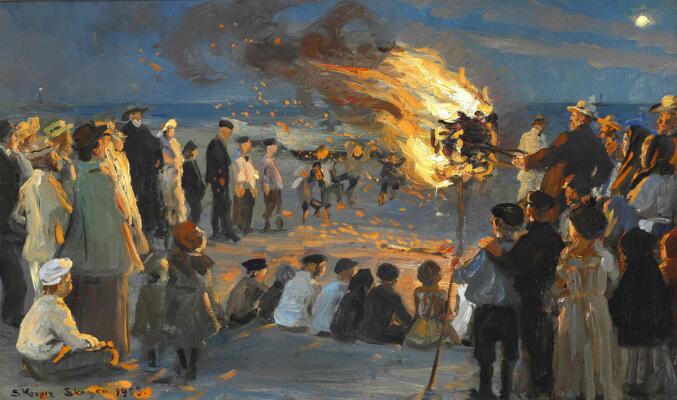 The boy sitting at the bottom left is Walter Schwartz, in front of him is Anna Ancher standing. The head with the straw hat just visible to the left of Anna's head is Michael Ancher. The distinctive tall figure with wide-brimmed felt hat, cape and beard is of course Holger Drachmann with Soffi Drachmann at his side, the sparks from the fire are about their ears. To the right of the fire in the background in white summer clothes is city treasurer Brodersen seen, and rescue chairman P. K. Nielsen keeps track of the fire.

In Krøyer's final painting at Skagen Museum, Marie Krøyer and Hugo Alfvén are also seen leaning against a boat in the background. In the foreground to the left is Vibeke Krøyer seen together with her uncle Valdemar Triepcke, Marie's brother. To the right are the painter Laurits Tuxen with his sketchbook and his wife Frederikke seen.

“In 1903 Krøyer began painting Midsummer Eve bonfire on Skagen beach. At midsummer eve, he placed his easel on the beach and he had notified his friends what lay ahead. When the fire was lit, they had all shown up around the old bascule light in Østerby. A little pastel and a few highlights was enough to set the composition. It was easy, warm and cold colours against each other, an orange line to mark the fire, and then the figures began to come to life.” “Already on the first night Drachmann placed himself, where he wanted to be depicted. This was probably the worst place, because sparks and heat from the fire made it almost impossible. Drachmann acknowledged the mistake and said to Krøyer: ”Dear Søren, if you let me stay here, my beard and hair will turn black and besides, I hate the smoke.“ (Lise Svanholm:”Malerne på Skagen", 2011, p. 240 and p. 242).