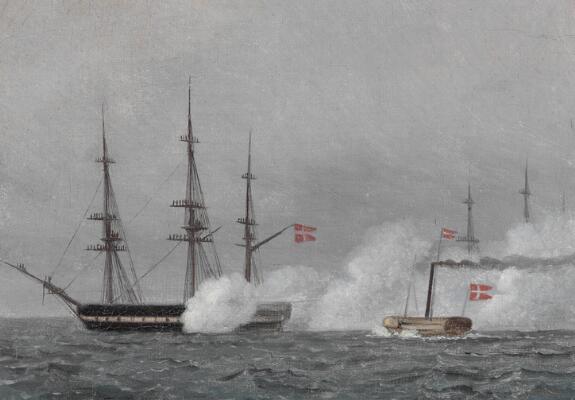 In his diary on 1 May 1832, Eckersberg describes the experience that inspired this motif (in Danish): “Tuesday. It had been decided that the frigates [The Nymph and The Mermaid] should set sail this morning. The young Prince also went aboard accompanied by his father this morning at 7:30 am. Because of this occasion, the steamship Dania made a trip to Elsinore, but it rained and there was a strong gale blowing from North by North-East. The frigates had to stay until the afternoon, but when the wind had changed to the South they departed at 7 o'clock with the help of their sails. Captain Sletting also sailed along. The trip to Elsinore was quite pleasant – except for the rain.”

Later he writes on 28 May 1832: “Monday. Started work on a new painting of a seascape depicting the first of May. And again on 17 August 1832: ”Friday. Had the early summer painting from 1 May in front of me again and changed something in the composition.”