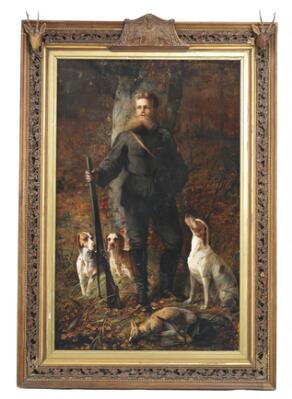 Emil Holstein Rathlou (1849–1919) heir of the estate Rathlousdal. After the hunt with his dogs and game. Signed and dated Elisabeth Jerichau 1876. Oil on canvas. 252×163 cm. Gigantic partially gilt oak frame with carved ivy branches and string of pearls. At the top the family coat of arms and antlers.

Literature: The impressive painting is mentioned and reproduced in several books among others in Jesper Laursen & Eva Schmidt, “Herremanden. En Adelig families storhed og fald”, a book about the deroute of Emil Holstein Rathlou and his family, 2013, reproduced p. 78.

Emil Holstein Rathlou of Rathlousdal was married to Elisabeth Jerichau Baumann's daughter Sophie (1859–1944). The painting was carried out before they were married.

Emil Holstein Rathlou was very committed to the development of the local community in Odder in Jutland. The manor house Rathloudal is situated near Odder. He was active in founding Hou harbour in 1880 and a founding member of “Dansk Jagtforening” (the Danish Hunting club) 1884 and a member of the board from 1892–1897. Emil Holstein was a great advocate for the game in a civilized country like Denmark should be protected during the breeding season and this is the law today.

Elisabeth Jerichau Baumann was born in Poland, but the family fled to Germany. She studied in Düsseldorf and later went to Rome where many artists gathered. Here Elisabeth met her future husband the Danish sculptor Jens Adolf Jerichau. They married in 1846 and had nine children. This did not prevent her from travelling and she spent longer periods abroad, especially in Rome.

Elisabeth was allegedly the first European woman who was allowed to paint from harems in Turkey and Egypt.