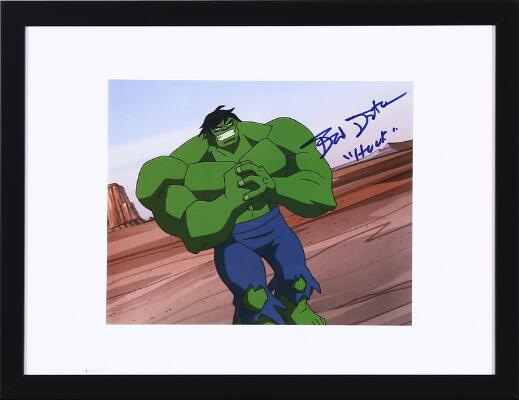 12004/​57
An animated colour photograph of Hulk with the signature of the American dubber Fred Tatasciore (born 1967). The voice behind Hulk.

An animated colour photograph of Hulk with the signature of the American dubber Fred Tatasciore (born 1967). The voice behind Hulk. Photo size 20.5×25 cm. Frame size 33×43 cm.

Thoughout his career Fred (Frederick) Tatasciore has lend his voice to numerous characters, often villains. He is probably best known as the voice in a number of Marvel productions, including 'Marvel: Ultimate Alliance 2', 'The Avengers; Earth's Mightiest Heroes' and 'Avengers Assemble'.

This is an original animated photograph of the Marvel character Hulk with the authentic signature of the American dubber Fred Tatasciore. Certificate of authencity included.