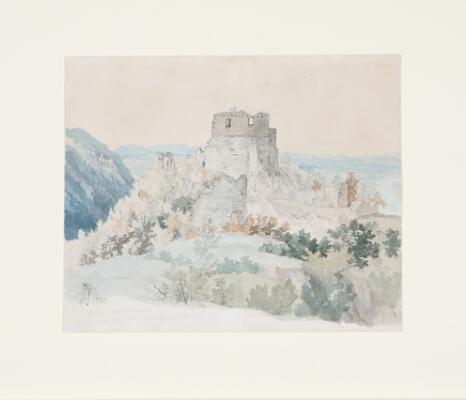 The Ruins of the Royal Palace in Croatia. Signed and dated ”G.W. [a palmtree] 1840” and by the artist inscribed ”Daßs Keysers Schloss i Croatien n. d. n. Gez.[eichnet] de 21 October 840 in gesellschaft mitt Sne Excelens Baron v Ottenfels inkognito”. (The Royal Castle of Croatia drawn from nature 21. of October 840 in the company of His Excellency Baron v Ottenfels inkognito.) Pencil and watercolour on paper. Sheet size 23.6×29.2 cm. Unframed.

Baron Moritz Franz von Ottenfels (1820–1907), the son of the Austrian-Hungarian minister Baron Franz Xaver von Ottenfels (1778–1851), was one of Palm’s closest friends during his two year long stay in Vienna between 1838–40. In September 1840 the Ottenfels’s invited Palm to visit there chateau, Horwatzska, in Hungary, on which occassion they made an excursion to Croatia, where they owned yet another castle. The ruin depicted is probably the ruins of the medieval fortress, Klis, situated in the mountains outside Split. At one point it was expanded and served as the seat of many Croatien kings, until it was turned into a fortress during the Ottoman period. Franz Xaver von Ottenfels usually travelled under the name Henry Werner, thus Palm’s inskription ”inkognito”.

A few minimal discolourations and a minor repair near edge. Mounted in passepartout with hinges.

Delivery in the United States from 630 kr. provided the final price does not exceed 50,000 kr.

Log in to see the cost for shipping this lot to your address.