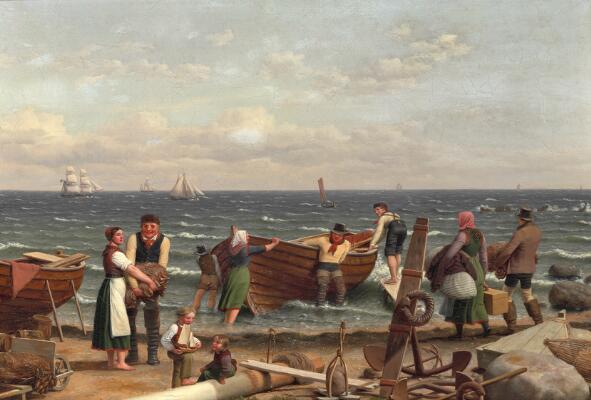 Literature: Emil Hannover, “C. W. Eckersberg”, Copenhagen 1898, p. 165 and p. 382–383. In this, a reproduction of a description, found among Eckersberg's papers, of the painting (in Danish): “The viewer is on a low shore in front of a fishing village and has a view of the sea, in the distance some ships are seen sailing for a brisk wind, on a clear morning, the wind blows in towards the land. Three fishing families, who are joint owners of a boat, have put this in the water, some of them are still busy making it look great, while others bring the combined fishing nets and gear to the shore and in the boat. A couple of children are playing, a little boy with his little ship, over which the parents seem to rejoice. At the front of the shore, in addition to some fishing gear, is a piece of a mast, ship anchors, etc. from a stranded ship, you can see pieces of its wreck protruding over the water at some distance from the shore and another fishing boat that has sailed out”.