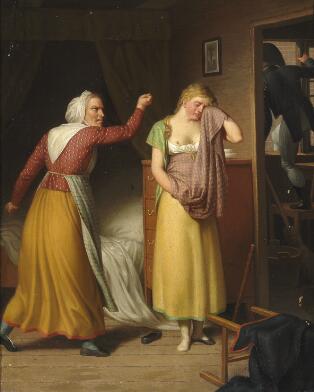 Emil Hannover, A Catalogue Raisonné of the Works C. W. Eckersberg no. 42.

Provenance: Lieutenant Mathiesen, who sold all four paintings to wine dealer J. B. Sandberg for 60 Rigsdaler. At the Sandberg auction in March 1871 all four were sold to Mr. Alfred Meyer for 201 Rigsdaler. Later in the collection of Mrs. Councillor Heyman. Sold at the Heyman auction in April 1917, no. 88. Later in the Swedish industrialist and art collector Falk Simon's collection.

The series “The Story of a Fallen Girl”, consists of four small paintings, which all are engraved by G. L. Lahde and by C. F. Clemens. The titles are: Part I, The Lover Flees though the Window; Part II, The Mother negotiates with a Gentleman on the Girl's behalf; Part III, In a poor attic, the Girl does her make-up before leaving for a masked ball. Part IV, The former Beauty is begging by the harbour, her old lover walks by but he does not recognize her. The tragic story is told by Philip Weilbach in his Eckersberg biography, 1872, p. 18.