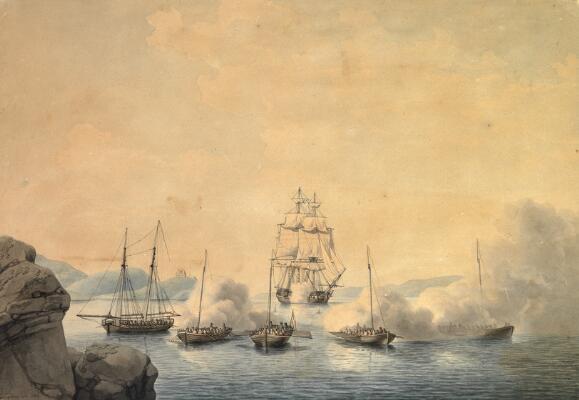 The Battle of Alvøen near Bergen in Norway was a naval battle fought between the English frigate HMS Tartar and five Danish/Norwegian gunboats during the Gunboat War (1807–1814) part of the Napoleonic Wars.

Probably intended as a model for the copper engraver Niels Truslew (1762–1827), which the young Eckersberg, up to his great trip abroad, which he began in 1810, provided with several models with motifs from the Napoleonic Wars.

Provenance: The estate auction of J. C. Dahl's left paintings and studies together with a collection of etchings and drawings (including the present drawing) of an unknown collector, Copenhagen 1860, no. 197. Here acquired by merchant Fritzsche.