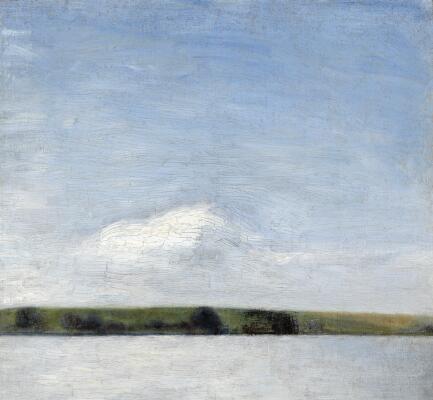 Sophus Michaëlis and Alfred Bramsen, A Catalogue Raisonné of the Works of Vilhelm Hammershøi no. 65.

Bramsen writes the following about the painting and at the same time provides a description of Hammershøi's original perception of the landscape: “His first characteristic, small exhibition landscape (no. 65) was created during a summer stay in Lyngby in 1888. This painting, which was exhibited at the first Free Exhibition in 1891 in the art dealer Kleis's halls on Vesterbro, also did not attract the attention it deserved, with its new and completely unique view of Danish nature – a perception that comes up again and again in his later landscape paintings: the low horizon under a very tall, cloudy sky, which takes up most of the surface of the canvas. Between the mighty sky and the foreground [...] – there is a narrow strip of land. This strip is the 'Landscape' in a conventional sense, which with Hammershøi consists of a road with rows of trees stretching across the canvas, or a shrub-covered slope leading down to a lake, or groups of trees atop a hill in an undulating terrain.” (p. 44).

Poul Vad writes about the painting: “ Hammershøi's earliest landscapes already carried the seed of his distinctive landscape art, whose fundamental motif now (i.e. in 1888) became crystallized in a painting with the landscape as a transverse strip running along the middle ground under a tall sky.” (p. 56).

Bramsen's works by Hammershøi were inherited by his daughter Karen Bramsen (1877–1970), and she married Gustav Falck (1874–1955). Gustav Falck was an art historian, and in 1925 he became Karl Madsen's successor as director of the National Gallery of Denmark. The museum can thank him for the purchasing of portraits of Tizian and Frans Hals. Falck had a large private collection of an exquisite quality, which in addition to many works by Vilhelm Hammershøi included works by many other artists.