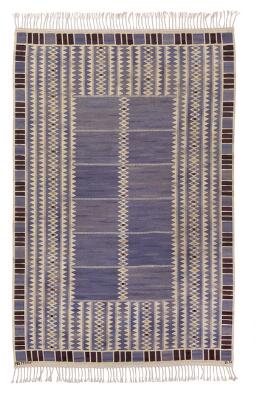 Barbro Nilsson trained as a weaver at Johanna Brunsson's Weavers School in Stockholm and at the Technical School. She was the headteacher at the textile department at the Academy of Arts 1947–1957. Barbro Nilsson's early works from the 1920s and 1930s are large tapestries made after paintings by various Swedish artists. This way she started developing her great weaving technical skills already at a young age. During her studies at the technical school she began making her first sketches for carpets. From 1942–1970, Barbro worked as an artistic director of Märta Måås-Fjetterström's weaving studio in Båstad. Here she created countless carpet compositions, these often in different colour sets.

Nature, the sea and old folk art were Barbro's primary sources of inspiration. These inspirations in correlation with her great knowledge of weaving techniques formed the foundation of her beautiful carpets that testify to a great understanding of composition, technique and colour composition.

However, Nilsson's “Salerno” carpet has an atypical origin. It was designed for the chapel of the small Italian town of Salerno after the tragic event of a plane crash close to the town involving 25 young Swedish pilots. Read the full story here: https://theswedishrugblog.wordpress.com/2016/11/21/salerno-1947/