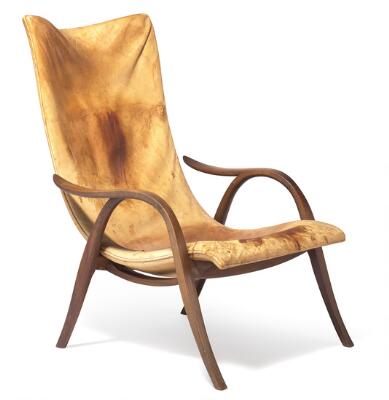 This would be Frits Henningsen's last design. For a Cabinetmaker and designer who as early as 1914 had presented Louis XVI style furniture, and who later in the 1930–1940s developed his own peculiar style with a mix of traditional and contemporary elements, this chair from 1954 would be the closest he would come to a purely Modern Mid-century chair - coming full circle from his starting point. With none of the characteristic profiles, it is only through the high level of quality in its making and a sort of tiptoeing lightness of the legs that we recognize him. It is funny that this rare, and generally unknown in its day, chair is largely the same basic chair as what is possibly the best known Swedish chair from the 1950s, The Lamino chair from 1956 by Yngve Ekström.