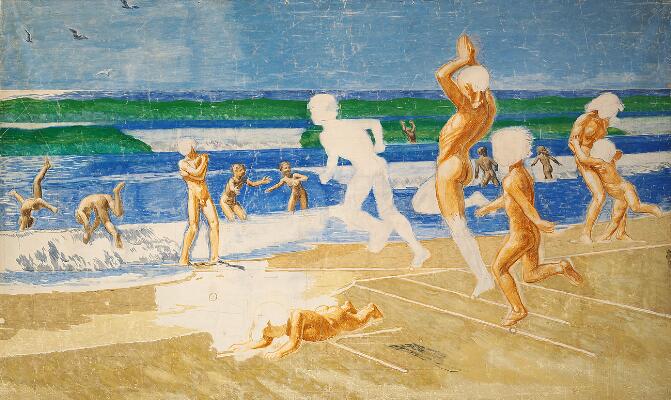 The work offered for sale is a large preliminary work for the monumental “Badende børn på Skagens Strand” (Children Bathing at Skagen Beach) also called “Sol og Ungdom” (Sun and Youth) (1910), located at the Gothenburg Museum of Art, Sweden. Another preliminary work, the so-called “dress rehearsal” dating from 1909, is found at the J. F. Willumsen Museum (deposited by Skagens Museum until 2006).

The artist worked with the motif for 8 years, with several long intermissions. Originally Willumsen got the idea for the painting in Amalfi, Italy, in 1902 where the suntanned, bathing children fascinated him. He began making the first preliminary works in the shape of photographs, drawings with pencil and watercolours. In the summer of 1902, he continued his studies for the work in both Amalfi and Brittany, especially studying the breakers of the sea. The composition was assembled and “put up” in the studio at home. In the summer of 1909, Willumsen put the final touches on the dress rehearsal at the beach of Skagen while the final painting was completed in 1910.