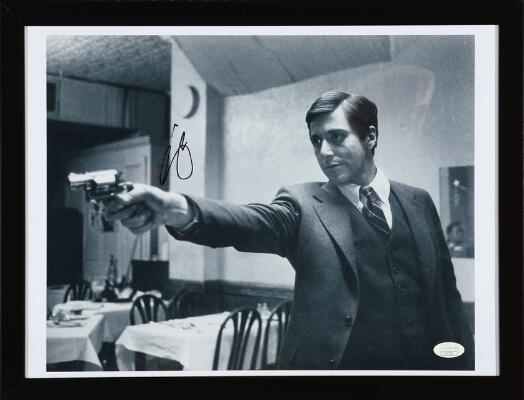 In this scene, one of the most iconic in the Godfather trilogy, Michael Corleone is rising to the occasion and kills the corrupt police officer McCluskey as well as the gangster Solozzo. The scene takes place in the imaginary “Louie's Restaurant” at White Plains Road in the New York neighborhood Bronx.

In 1966, after several attempts, Al Pacino managed to get into The Actors' Studio, where he - among others - was taught by Lee Israel Strasberg (1901–1982), whom he later was to face in “The Godfather”. Here Strasberg plays the gangster Hyman Roth, a character built on real life Meyer Lansky (1902–1983).

No remarks. This is an original b/w photograph with the authentic signature of the American actor Al Pacino. Certificate of authenticity from BAS (Beckett Authentication Services) included. BAS is one of the most reputable authorities in the world within the field of valuation and authentication of signatures.